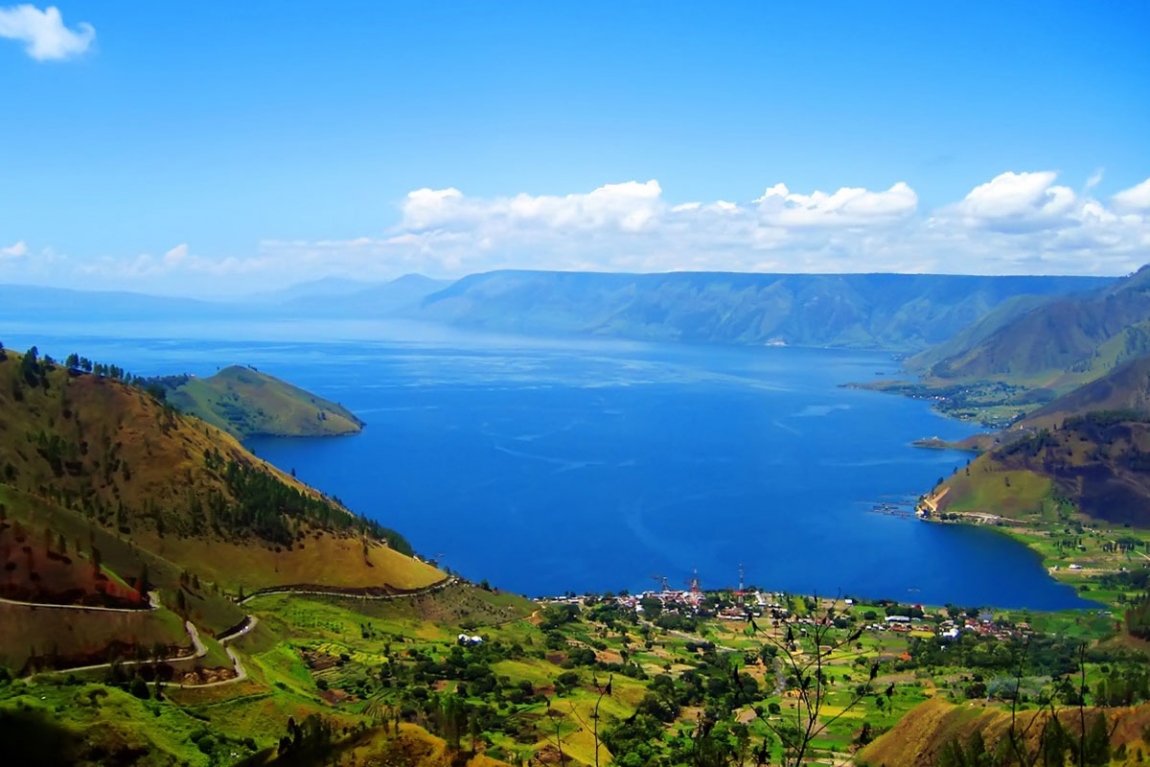 Sumatra is one of the largest islands in Indonesia and has invaluable natural and ethnological riches: forests inhabited by large mammals such as -elephants, rhinos, tigers, leopards, orangutans-, and diverse ethnic groups, due to culture and traditions, one more interesting than the other.

The coasts have been for millennia, the meeting point for Chinese traders, Indians, Arabs, Turks, Buginese, Javanese, who would then trade their goods there. The inside however, protected by high mountains covered with jungle and inhabited by warlike tribes remained virtually unexplored until the beginning of the 19th century.

In 1783, the explorer William Marsden, amazed the Western world by talking about a civilisation that practiced cannibalism but also possessed a high degree of culture and an advanced writing system. Marsden was referring to the Batak of Lake Toba, today one of the friendliest people of the Indonesian archipelago, lovers of music and festivals.

Lake Toba is one of the most spectacular places in Sumatra -an extraordinary volcanic crater located in the center of northern Sumatra, 176km from Medan-. The lake is huge - the largest in Southeast Asia - and very deep. Occupies a caldera with the remains of a giant volcano that exploded 100,000 years ago after a catastrophic eruption. The lake is surrounded by steep mountains, ridges and sandy beaches, littered with pine wood. Villages, coves, richly carved megalithic tombs.

Once proud warriors and cannibals, have remained isolated for centuries and every attempt at contact was dealt with the death or enslavement of the traveler. Now they are part of the new Indonesia, and one of the most powerful ethnic groups, largely converted to Christianity, which conserve animistic rites and ancient customs.

In the region further south, near Bukitinggi, live the Minangkabau, a rich and powerful matriarchal society, from the most original architectures of Indonesia and symbolising the boats of the ancestors. Fertile lands and hills, terraces cultivated with rice, tobacco, cinnamon, fruit and vegetables. The society of Minangkabau, despite important changes due above all to the phenomenon of migration, continues to be organised on the basis of the principle of matrilineal descent and, at least ideally, on a concentration of group members in the area dominated by the old common house or adat: ritual and symbolic center of matrilineage and of the territory controlled by it. The children are named after their mother's side and, after marriage, the husband moves into his wife's family. In fact they say that this is the reason why in all of the archipelago there is always Padang food, the bachelors not finding a wife had to go out of their land of origin and until they found a wife they had to learn to cook, doing this as a new skill for the means of livelihood!

The Bukitinggi market is a colourful scenario, which includes fragrant spices, bright fabrics and delicacies. One of the most attractive markets in Asia. It is an ideal place for your Instagram pictures.

In the forests around the town grow giant flowers, the Rafflesia Arnoldii and the Amorphophallus Titanum, a long with different species of primates and birds with bright colours. Lake Maninjau is a large volcanic lake surrounded by several villages, an ideal place to relax, experience the local rural lifestyle and watch a moving sunset. The views are breathtaking, descending the slopes of the volcano along Route 44, of the 44 bends.

The Harau Valley is very green and surrounded by high cliffs that make the landscape spectacular.

At Way Kambas National Park it is possible to go on elephant-back excursions in search of the tiger (not easy to see) and of the various fauna of the park, staying in the local Eco Lodge in a bucolic setting. The orangutans are easily sighted at the Bukit Lawang national park, sleep in small guest houses, by the river, trekking in the jungle and return descending the river attached to the inner tubes of trucks. Off the coast of Sumatra other islands offer opportunities to visit unique cultures.

Nias with the ancient traditional houses of the villages of Bawomataluo, Ono Hondro, Sifalawa, Hilinawalo and Hilisimaetano. For centuries the Niassesi have built villages with stone streets and wooden houses with thatched roofs, raised from the ground. The houses are adorned with symbolic wooden sculptures. The defensive strategy of the inhabitants required to build the villages on hills accessible by long stone steps. The stone was also used to build benches, seats and memorials.

In the isolated Siberut, in the Mentawai group, the traditional villages are located inland along the rivers and are composed of one or more common house Uma, surrounded by the Lalep, the normal houses. The houses are inhabited by several families. Traditionally the Mentawai wore clothes made from the bark of the trees, wore long hair, wore necklaces and bracelets, practiced the filings of the teeth and the tattooing of the bodies. The Mentawai and Nias, though preserving many traditions, have now opened up to tourism, mostly young surfers, who find here the most beautiful waves in the world.