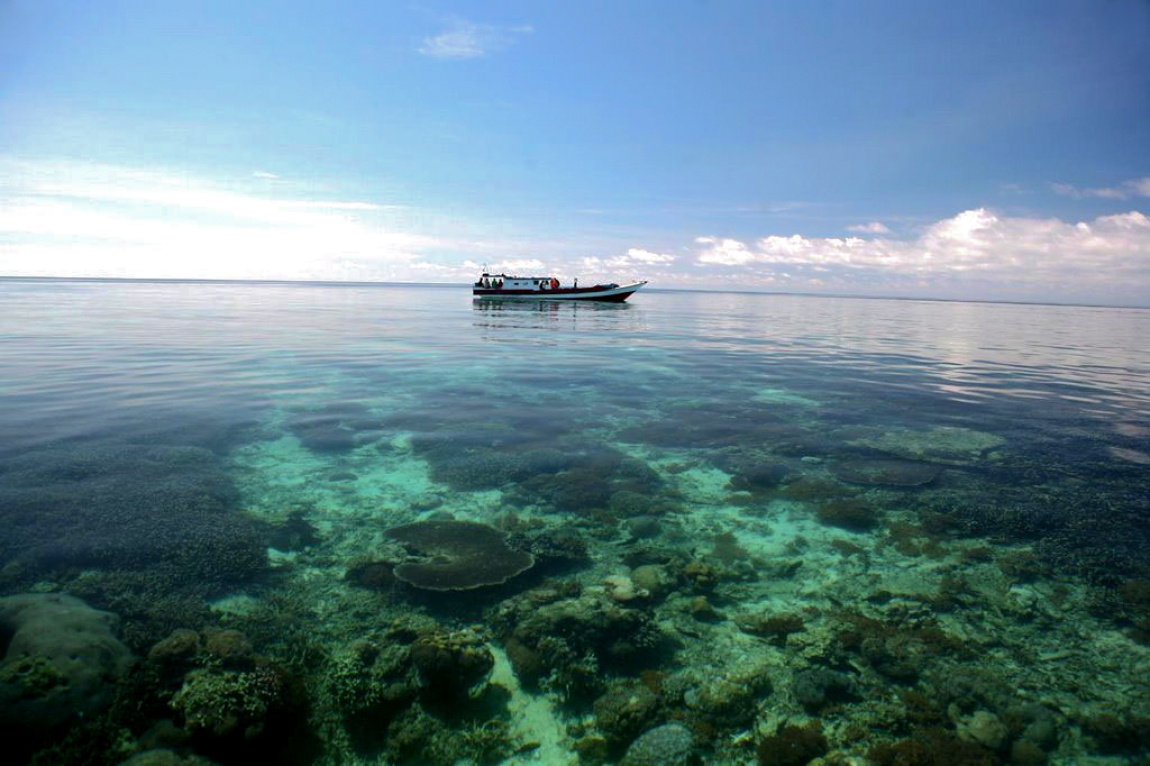 Derawan is far away from all tourist routes and rarely will you find any other diver but lots of big schools of barracuda, manta rays, grey sharks and lots of fish, and like other regions of Indonesia, rare critters and small invertebrates. At Kakaban, you will have the rare opportunity to capture fantastic underwater photographs in a lake filled with non-stinging jellyfish. And swimming in dream beaches in Maratua and with mantas in Sangalaki.

DIVING IN DERAWAN ISLANDS IN THE REMOTE INDONESIAN BORNEO

The northern region of East Kalimantan is one of the least visited in Indonesia, in this remote territory are the 31 isles of the Derawan Island Group, off the east coast of the Indonesian Borneo.

Make the most of your diving experience in the remote Derawan Islands with a dive cruise or liveaboard, contact a Liveaboard Specialist now

A shallow lagoon surround Sangalaki and the reef starts a distance out from the island, dropping from 3 to 40 meters at some points. The island itself is knows as feeding ground for mantas. There are well-know manta rays congregations in the northeastern part of the island. Here manta rays come from all directions, their wing tips breaking the surface at regular intervals and circle around you. They prefer to swim close to the surface, so snorkelling is also a good way to interact with them. The manta rays congregate here in large numbers and feed on plankton or are cleaned at special cleaning stations. Sometimes there might be as much 20 mantas hovering over the cleaning station.

In the south west of Sangalaki others good dive sites with hard and soft corals, gorgonians, colourful fish life and turtles. There is a good place for gobies, scorpion fish, clown fish, jaw fish, nudibranchs, frogfish, mandarin fish and ribbon eels as well as tridacna or giant clam.

Sangalaki is a breeding ground for green turtles. At night female turtles come ashore and lay their eggs and small baby turtles can be seen regularly, when they hatch. The island and its surrounding reefs are protected as Marine Park.

As Sangalaki draws attention for manta rays, Maratua does for large pelagic fish. Maratua is a large island with a massive lagoon. The island just rims part of the lagoon, the rest is fringed by reefs with two small islands in the south. Maratua has several impressive drop-offs and you will have a good chance to sea large pelagic like grey sharks, tunas, eagle rays and schools of barracudas, trevallies and mackerels.

The best dive site in Maratua is a big channel connecting the lagoon with the outer sea (pass). The channel itself is literally swept clean by the very strong currents and only the edges are covered with nice corals. The dive usually starts at the outside reef and you are swept into the channel by the current. At the entrance of the channel you can watch the large pelagic passing by: reef sharks, tunas and barracudas, napoleon wrasses, leopard shark and thresher shark.

The island is quite steep with limestone cliffs covered with dense jungle right down the water edge. Barracuda Point is a steep wall where the current brings large pelagic like sharks, jacks, tunas, snappers, trevallies and of course a large school of barracudas.

A special feature of Kakaban is the huge jellyfish lake, a mangrove fringed lake, slightly above sea level, where thousands of non-stinging jellyfish live. The jellyfish consist of four different species. They are non-stinging, having lost their natural defence system because of the lack of major predators in the lake. This place is similar to Jellyfish Lake in Palau, Micronesia. The Kakaban Lake has warm brackish water and the bottom is covered with marine green algae. There are other animals living here, some sea cucumbers, gobies, anemones, tunicates, crustaceans, nudibranchs, orange purple and yellow clams on the branches and snakes. The lake is at most 17 meters deep and visibility is not so good. 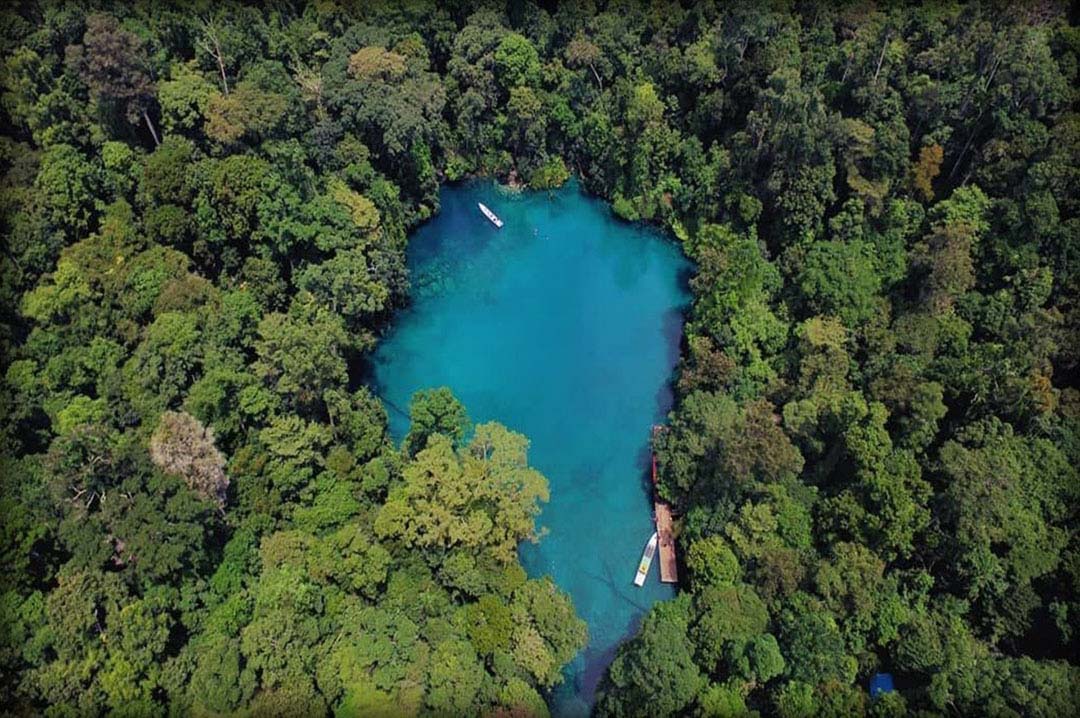 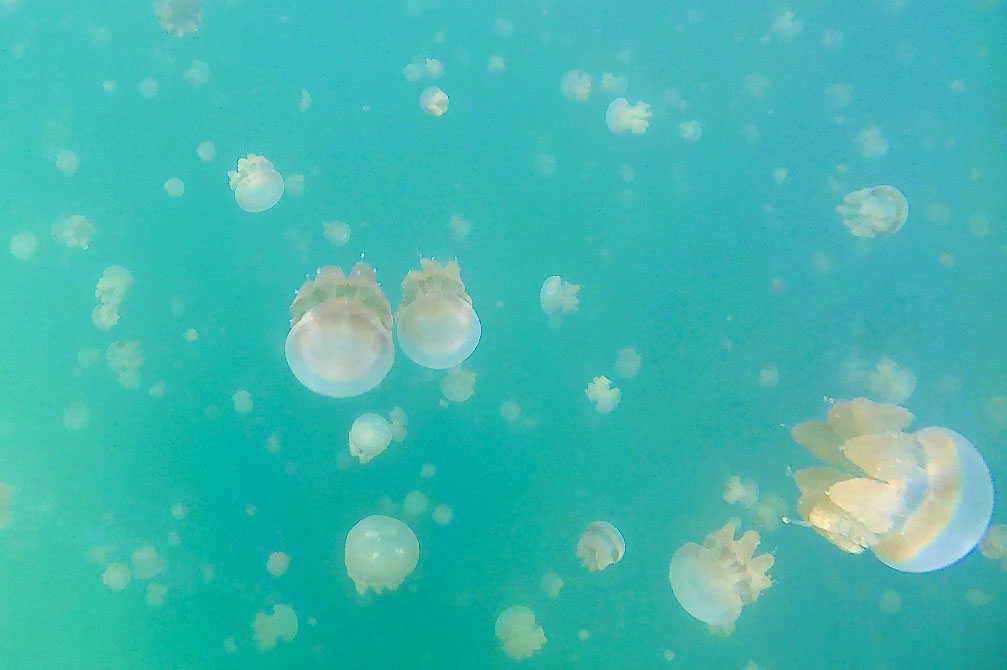 The small island of Nabucco is located within the Maratua lagoon and hosts the dive resort of the same name. Close to the pass where the pelagic is found, diving also features toad fish, scorpion fish, ghost pipefish, mandarins, invertebrates and nudibranchs.

Derawan is the most inhabited island of the archipelago, and where most of the tourist facilities are located. The bottoms are often grassy, and attract giant tortoises, which are easily spotted in shallow water. The dives are particularly dedicated to the macro blue ring octopus, ghost pipefish, nudibranchs, seahorses, but also lobsters, cuttlefish, and moray eels.

Some operators are starting to plan cruises in the area: Ondina, Seahorse and Ilike, together with Tambora, which has already operated in Derawan for some years.

Diving season: from April to October is the best time, from June to August, good weather but a little rough sea. Rainy season: from November to March. Water temperature: around 28°C, all year around. Visibility: on average around 20 meters, but in some periods after heavy rain it can drop a lot. Depths: 15 - >35m. Currents: in some sites, in the Maratua pass and in Kakaban, they can be very strong; in the rest of the dives, weak. Surface conditions: calm, with possible waves from June to August. Experience level: intermediate, some drift dives are challenging. Dive sites: >40. Length of stay: 7 days on diving cruise with one of the liveaboard operating seasonally in the region: Tambora, Ondina, Seahorse, Ilike or in one of the following dive resorts: Nabucco Resort, Nunukan Resort or Virgin Cocoa.

HOW TO GET TO DERAWAN ISLANDS

Airport: the East Kalimantan region is one of the least visited in Indonesia, tourist connections are still underdeveloped. The small Maratua airport has been in operation since 2018, served by only one charter flight per week from Balikpapan. Alternatively, you can reach the islands arriving at Berau airport, then in two hours by car and 1 hour by boat. Liveaboards embark passengers in Berau or in Tarakan. Climate: temperatures are between 23-32°C. The climate is hot and humid all year round. The dry season runs from April to October, from November to March is the rainy season, with the months of January and February receiving the most rainfall. Time Zone: Borneo GMT +7.

WHERE TO STAY TO DIVE DERAWAN ISLANDS

The archipelago of Derawan is still among the most remote diving destinations in Indonesia, accessible from liveaboard or from one of the three diving resorts operating in the region: Nabucco Island Resort, Nunukan Island Resort or Virgin Cocoa Resort. Follow the link to book or see details of each resort.